“Our fourth quarter and full year performance reflects the successful execution of our growth strategies and continued adoption of our product portfolio,” commented Karen Zaderej, President and Chief Executive Officer. “As more surgeons become aware of and evaluate the clinical and economic benefits of Avance® Nerve Graft, AxoGuard® Nerve Connector and AxoGuard® Nerve Protector, they are adopting our product portfolio to achieve better treatment outcomes for their patients. As we enter 2016, we are financially stronger than we were a year ago and our surgeon education forums continue to drive surgeon acceptance. Our strength and momentum, combined with a larger and more knowledgeable sales force, gives us confidence we can continue to significantly grow our top line during 2016. As a result, our plan for the coming year is for revenue to approach $39 million.”

Operating expenses for the quarter totaled $9.0 million compared to $6.5 million for the fourth quarter of 2014, reflecting the increased investment in sales and marketing to raise awareness of AxoGen’s product portfolio and expand its sales footprint. Operating loss was comparable between the quarters at $2.7 million. Net loss was $3.6 million, or $0.12 per share, compared to a net loss of $6.5 million, or $0.35 per share for the fourth quarter of 2014. In the year-ago fourth quarter,

the net loss included one-time interest expenses and the write off of non-cash deferred financing charges totaling $2.5 million that were related to the retirement of the PDL Royalty Contract.

The Company is forecasting full year 2016 revenue to approach $39 million and gross margin for the year in the high 70% range.

The Company will host a conference call and webcast for the investment community at 4:30 PM ET. Investors interested in participating by phone are invited to call toll free at 1.877.407.0993 or use the direct dial-in number 1.201.689.8795. Those interested in joining via the webcast, should visit http://axogeninc.equisolvewebcast.com/q4-2015.

Following the conference call, a replay will be available on the Company’s website at www.AxoGenInc.com, under ‘Investors.’ 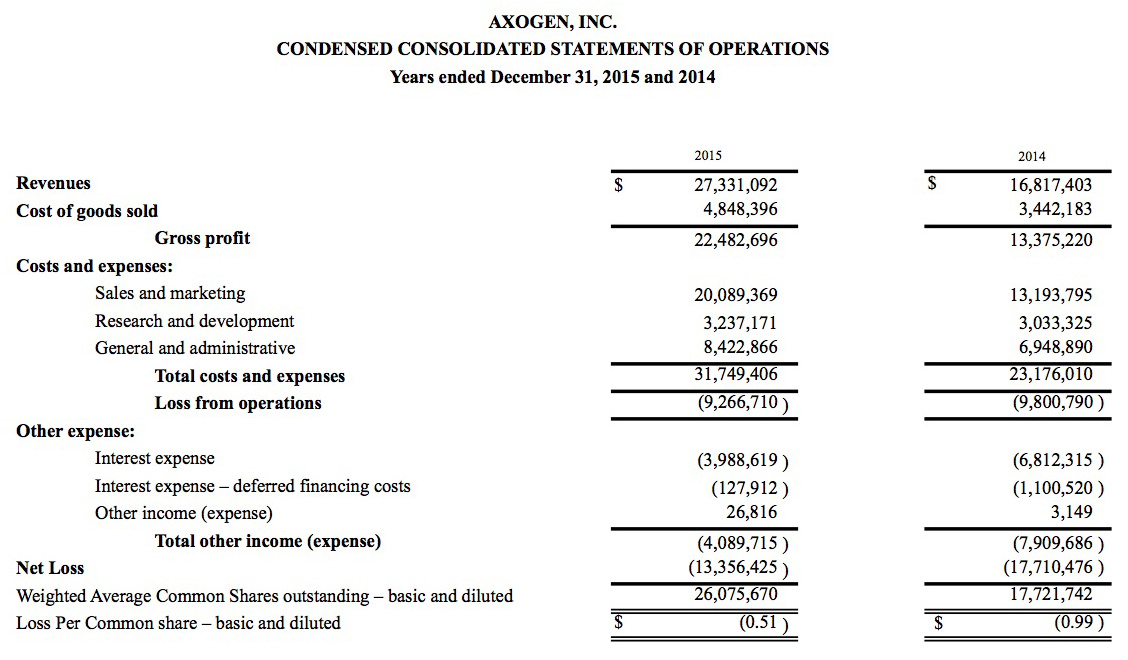 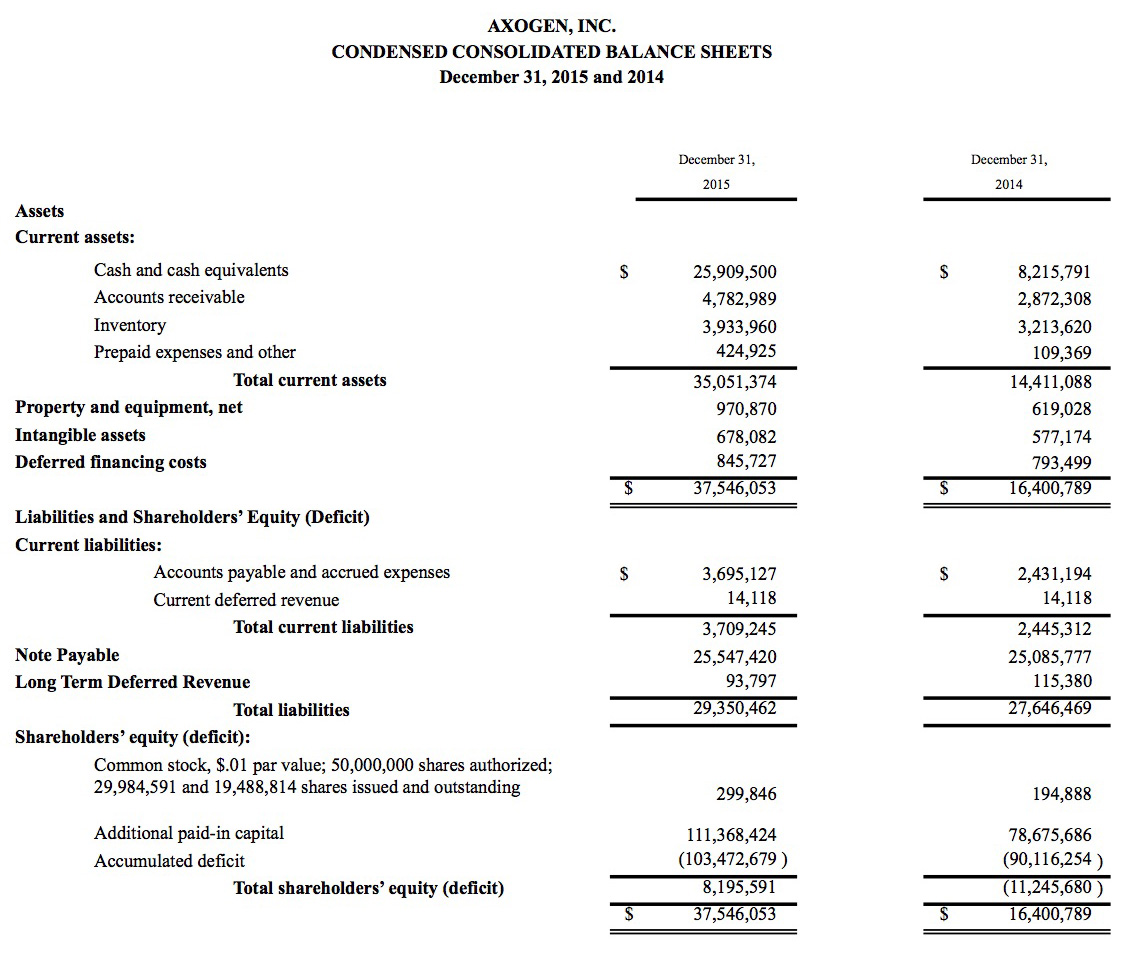 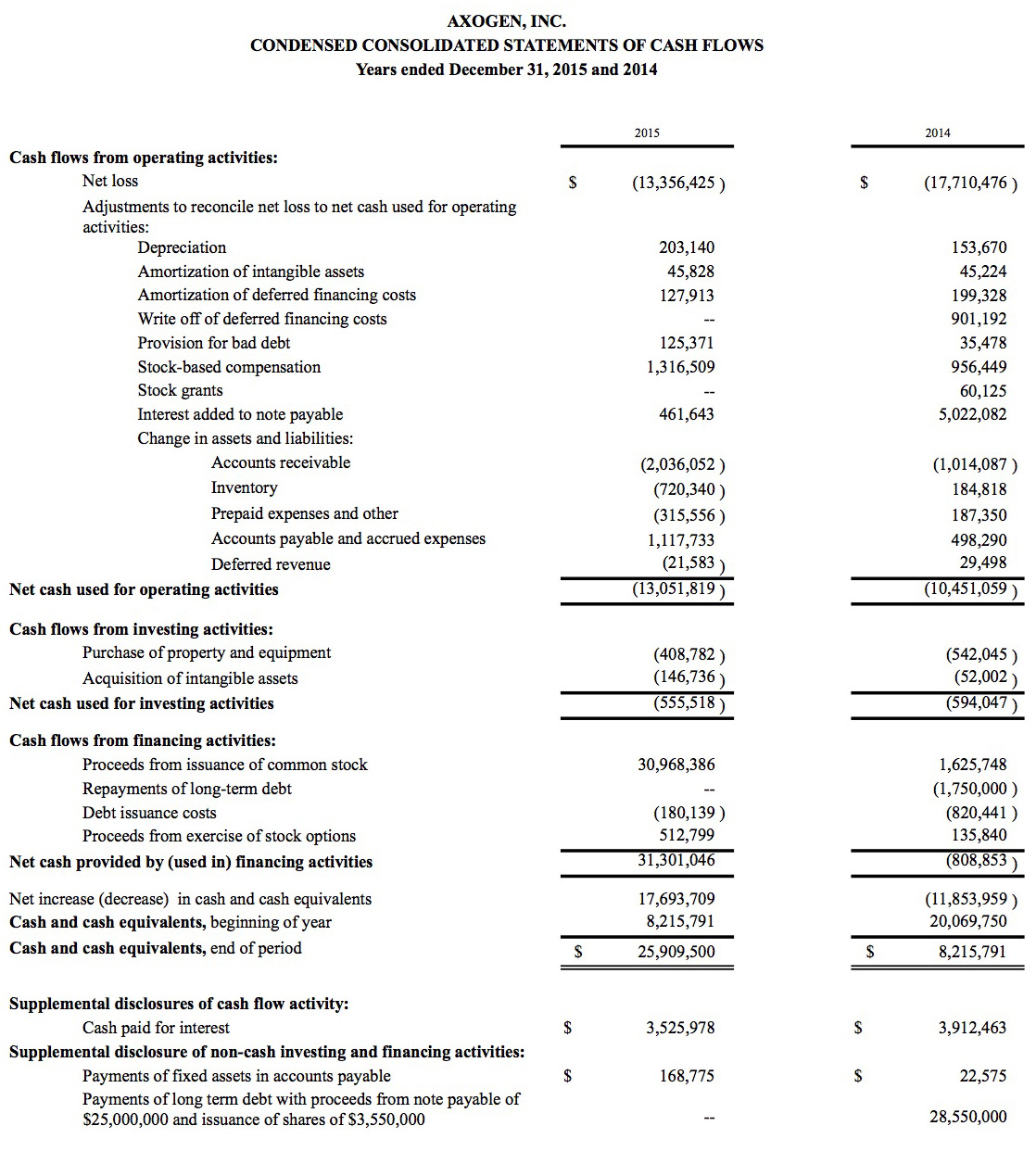 You are now leaving axogeninc.com

Axogen is not responsible for content or policies on linked sites.